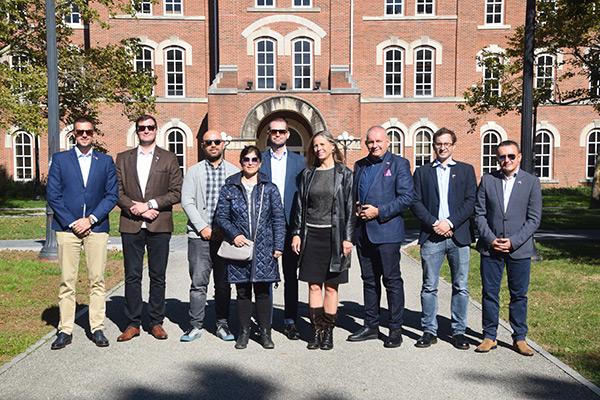 The Serbian Educational Alliance (SEA) hosted its first international visit, which took place the week of October 18 – 22, 2021. Seven members of the Faculty of Political Science and Centre for the Study of the United States of America at the University of Belgrade visited Ohio State’s Columbus campus for a week of meetings with university and state officials, discussions about teaching methodology, and visits to cultural and historical sites. The group was headed by the faculty’s dean, Dr. Dragan Simić, and included Dr. Filip Ejdus, Dr. Nikola Jović, Dr. Milan Krstić, Dr. Marko Dašić, Dr. Stevan Nedeljković, and Dragan Živojinović, who serves as the primary point of contact between Ohio State and the Faculty of Political Science. The delegation was joined by Vukica Stanković, cultural affairs specialist at the U.S. Embassy in Belgrade.

The week began with a tour of the Ohio Statehouse and a meeting with Major General Steve Stivers at the Ohio Chamber of Commerce. Stivers has dedicated much of his career to bringing Serbia and the U.S. together. This meeting was facilitated by Simona Vaclavikova, International Affairs Advisor, State Partnership Program of the Ohio National Guard. Through the State Partnership Program, the Ohio National Guard has worked to support educational cooperation and greater ties between Ohio and Serbian entities in a variety of spheres, including the Serbian Educational Alliance funded by the U.S. Embassy Belgrade.

The following day was spent in Dayton, Ohio visiting the National Museum of the United States Air Force located at Wright-Patterson Air Force Base. Wright-Patterson hosted the 1995 meetings of the presidents of Serbia, Bosnia and Herzegovina, and Croatia that led to the Dayton Peace Accords. This agreement officially ended the Bosnian War. As a result, Dayton is a very well-known city throughout the Balkan region. While in Dayton, the delegation also met with the Human Rights Center at the University of Dayton that was followed by a talk by Miami University historian Steven Conn titled, “Comparing Urban Environments in Ohio”.

The rest of the week was spent on Ohio State’s campus and focused on exploring the future of the Serbian Educational Alliance. The delegation met with Associate Vice Provost for Global Strategies Fernando Unzueta, Kevin Holtsberry from the Ohio Department of Higher Education, and political science and communications experts Dr. Alex Wendt and Jeff Trimble. The group also discussed new projects for the SEA with Dr. Lorraine Wallace of Ohio State’s College of Medicine and historian Dr. Theodora Dragostinova. These meetings were interspersed with viewings of special collection exhibits at the Hilandar Research Library and the Billy Ireland Cartoon Library and Museum.

One of the main themes of the Serbian Educational Alliance is exchanging and observing teaching methods. During their trip to Columbus, the delegation was able to observe an undergraduate Public Affairs class taught by Dr. Megan LePere-Schloop. The class was using a flipped classroom model, which meant the lesson was being taught by a group of students. The Serbian professors were integrated into the class and participated in all activities and discussions. After the class finished, the group met up for a debrief along with several faculty members affiliated with the Drake Institute for Teaching and Learning. This opportunity was incredibly valuable and provided first-hand experience in an American university classroom.

For more on the SEA, please visit our webpage.