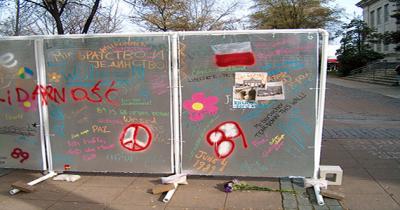 As part of a new series of adult programming, the Bexley Library in Columbus, Ohio, hosted CSEES assistant director Eileen Kunkler for a presentation at the library on the evening of November 4, 2014 to commemorate the 25th anniversary of the fall of the Berlin Wall. Discussing the division of Germany and Berlin after World War II, the building of the Wall in 1961 and the events that led to its eventual collapse in 1989 provided a context and a history to an event that is known around the world as a turning point for countries in Eastern Europe. Audience members were interested to hear about political and social developments throughout Central and Eastern Europe in the 1980s, what life was like in East Berlin and some of the lasting cultural and political effects from this momentous event that are still evident today. CSEES is proud to work with community organizations in this way to broaden people’s understanding of Eastern Europe and Eurasia.