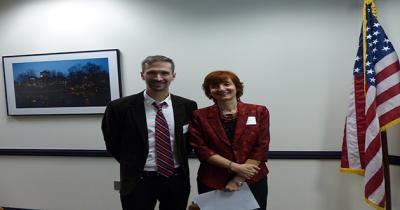 Gregor Kranjc, assistant professor of history at Brock University (Ontario, Canada), is a member of the Society for Slovene Studies, which helped to found the Slovene Research Initiative (SRI) in 2013 through CSEES. Kranjc delivered the inaugural SRI lecture at Ohio State on October 1, 2014. His presentation, “But the Germans Didn’t Want Anything From Us: The Lessons of World War II Slovene Collaboration,” reflected Kranjc’s focus on the Balkans, war and society and the intersection between historical trauma and memory. Kranjc emphasized several important legacies of the Slovene collaboration with the Axis occupiers (Nazi Germany, Fascist Italy and Hungary) and recognized significant lessons that the Slovene experience contributes to the more general study of collaboration with the enemy during times of military occupation. The Slovene cooperation with the Axis occupiers divided the Slovene nation from 1941-1945 and continues to affect Slovenia today.

Kranjc’s lecture was attended by more than 60 Ohio State faculty, students and visitors, including members of the international Society for Slovene Studies. The talk marked the beginning of the Slavic Center’s busy 2014-2015 event season and was followed by a gala reception.

Kranjc is the author of the book, To Walk with the Devil: Slovene Collaboration and Axis Occupation, 1941-1945. He is also senior historian with the Canadian Department of Justice’s Crimes against Humanity and War Crimes section.