Poland, the Polish Studies Initiative and the Event “Political Behavior and ‘Big Data’” at Ohio State 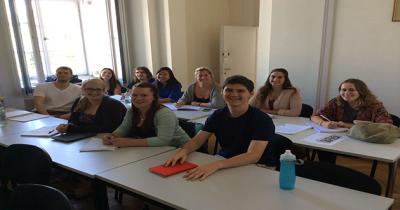 From the wealth of cross-national survey projects, data and research, scholars know a lot about the relationship between political behavior and democracy. Yet, we have only begun to use this wealth of knowledge to its fullest: international survey projects could be harmonized ex post and turned into ‘big data’ that consist of an unusually large number of variables and with individuals nested in countries and time periods.

This idea informed the two-part event Interdisciplinary Studies of Political Behavior and the Use of ‘Big Data’. The event consisted of a conference and a workshop. Organizers of the event included Ohio State’s Department of Sociology, Mershon Center for International Security Studies, CONSIRT and the Polish Academy of Sciences.

Ohio State’s Polish Studies Initiative played an important role in helping make this event a success. Through this initiative, event organizers were able to invite Andrzej Rychard, director of the Institute of Philosophy and Sociology, Polish Academy of Sciences. During the conference, Professor Rychard delivered a paper on political exit, voice and loyalty in contemporary Poland.

Graduate Students from the Graduate School for Social Research at the Polish Academy of Sciences (located in Warsaw, Poland) attended both the conference and the workshop to help train the next generation of international, interdisciplinary scholars.

The workshop “Comparability of Survey Data on Political Behavior: Ex Post Harmonization of Selected Survey Projects” focused on key methodological and statistical issues in comparability of survey data in the context of harmonization.  Discussions benefited from expert insights of established scholars, including that of Professor Dean Lillard, Ohio State’s College of Education and Human Ecology, who is the principal investigator of the Cross-National Equivalent File (CNEF).

Event organizers are planning a special publication based on the event, and a newsletter designed to build a scholarly community on methodological issues in survey data harmonization.

Interdisciplinary Studies of Political Behavior and the Use of ‘Big Data’ was organized within the research project “Democratic Values and Protest Behavior: Data Harmonization, Measurement Comparability, and Multi-Level Modeling in Cross-National Perspective,” funded by the Polish National Science Centre within the framework of the Harmonia grant competition (2012/06/M/HS6/00322) and housed in the Institute of Philosophy and Sociology, Polish Academy of Sciences. For more on this project, please visit the data harmonization website, dataharmonization.org