The Slavic Center and the University Libraries co-sponsored a session with professional translator Dr. Anne Fisher on Thursday, Sept. 14, at Thompson Library. The

comfortable living-room quality of the library reading room created a salon-like atmosphere to a bravura presentation by Fisher that combined fascinating insights into translating contemporary Russian prose and poetry with entertaining comparative dramatic readings in English and Russian of selections from her translation of Ksenia Buksha's novel, The Freedom Factory, (awarded Russia’s 2014 National Bestseller prize), forthcoming from Phoneme Media in March 2018. 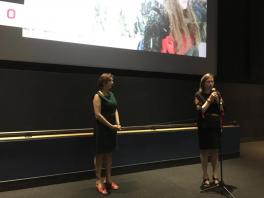 A postmodern reimagining of the Soviet production novel, The Freedom Factory, weaves together tales told by factory workers, managers, engineers, and janitors to

create the (lightly-fictionalized) history of a real military plant in Leningrad/Saint Petersburg from the Nazi bombardment in WWII to the present day. Fisher’s readings brought the factory personnel to life, while her perceptions into the intricacy of translation — especially the wordplay and nuances of poetry — highlighted the difficulty of the field. Her presentation was followed by a question and answer session about Fisher’s translation and the work of translating literature in general.

Fisher also has translated works by Ilya Ilf and Evgeny Petrov, Andrey Platonov, Nilufar Sharipova, and Margarita Meklina. With co-translator Derek Mong, Fisher won an NEA Translation Grant to support work on contemporary Russian poet Maxim Amelin’s verse; their renderings have appeared in Asymptote, the Brooklyn Rail, Two Lines, the International Poetry Review, World Literature Today, and elsewhere. Fisher has served as translation editor for two collections: Red Star Tales: A Century of Russian and Soviet Science Fiction, ed. Yvonne Howell and 100 Poems about Moscow: An Anthology, ed., coll. Artyom Skvortsov. She is currently translating Sigizmund Krzhizhanovsky’s A Poetics of Titles and, with Margarita Meklina, curating a folio of Russian LGBTQ poetry and prose. Fisher received her PhD in Russian literature from the University of Michigan and lives in Indiana.

The Center for Slavic and East European Studies hosted filmmaker Olha Onyshko on Thursday, Sept. 28 to screen her film, Women of Maidan, at the Gateway Film 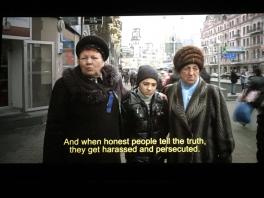 Center. The film chronicles the protests in Kiev’s Maidan Square from November 2013 to February 2014 and the essential role that women played as protestors, protectors, and patrons.

Onyshko, who now lives in the United States, received a phone call from her mother in late November 2013 informing her of the government’s use of excessive force against the young protestors in Maidan square. As soon as she heard the news, Onyshko flew back to her native Ukraine to capture footage of the protests on the square. The protests were a response to President Yanukovych’s refusal to sign an association agreement with the European Union. The government’s brutal crackdown on the student protestors shocked the nation’s conscience and soon people of all ages descended on Maidan to condemn the excesses of the administration.

Through the film’s intimate portrayal of the frontline protestors, Onyshko captured their resilience and optimism for a better future in Ukraine in the face of the riot police’s (Berkut) persistently violent force against the protestors.

Interviewing women of all ages, the film depicts the steadfast beliefs and nurturing tendencies embodied by female protestors who continued to stand on the streets throughout the coldest months of the year. 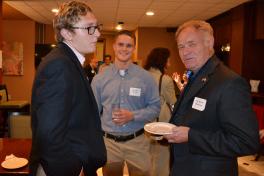 frontlines and provide them with tea, soup and warm clothes. The younger women conveyed a message of hope for Ukraine, to bring about a government that is more accountable to its people and a future with closer relations to the European Union.

Following the film, Marianna Klochko (Ohio State Department of Sociology) facilitated a lively question and answer session with Onyshko and the audience.

Dr. Boris Boincean, a visiting Fulbright scholar at Ohio State, is pursuing research in the Carbon Management and Sequestration Center from September 2017 to February 2018. Throughout the fall semester, he met with Slavic studies students several times to engage them in Russian language practice and discuss environmental affairs with them.