Centenary of the Russian Revolution 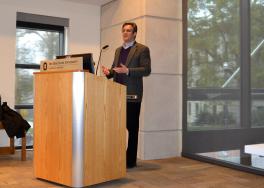 This year, 2017, marked 100 years since both the February and October Revolutions — two events that had indelible influences on the succeeding century and

people and countries around the globe. CSEES collaborated with numerous campus entities throughout the fall semester to organize a series of events to spur a discussion about the impact of these revolutions on life and culture at the time, as well as the lasting impacts of them on history, politics and culture.

The Center for Historical Research and the Russian, East European, and Eurasian History Seminar, with co-sponsorship of CSEES, hosted Professor Aaron Retish from Wayne State University on Oct. 20 for a discussion about courts and the Russian Revolution. Professor Retish discussed his current work in progress, which examines the role of local courts in Russia before and after the October Revolution, as well as revolutionary tribunals, to see whether peasants used these courts differently. 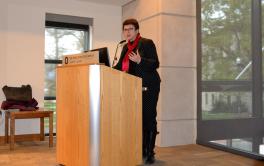 What followed was a highly-engaged discussion between more than 30 members of the audience, mostly graduate students and faculty. The audience was

particularly interested in the documents and evidence Retish had found in the archives to demonstrate the types of cases peasants brought before local Soviet courts, whether he saw evidence of the Soviet’s early policy of gender equality in court documents, and his impression regarding the role of these courts in the everyday lives of the average Soviet citizen in the 1920s. Additionally, there were several questions about whether his research only reflected the experience of courts in the Russian Republic, or whether similarities could be drawn between courts in other parts of the Soviet Union, or after revolutions in other parts of the world. 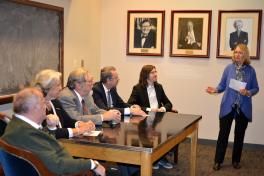 To commemorate the 10th anniversary of the October Revolution, the Soviet government commissioned the director Sergei Eisenstein to create a dramatization of

the Revolution. What resulted from this effort was one of the groundbreaking films of the 21st century, October: Ten Days That Shook the World, a black and white silent film. In partnership with the Wexner Center for the Arts and the Department of Slavic and East European Languages and Cultures (DSEELC), CSEES brought the film to campus for a screening on Oct. 24. Prior to the film screening, Professor Yana Hashamova, DSEELC, spoke to the audience about the history and importance of the film. When it was originally released in 1928, the film was actually not well received by Soviet authorities and intellectuals, many of whom criticized it for being too “bourgeois.” 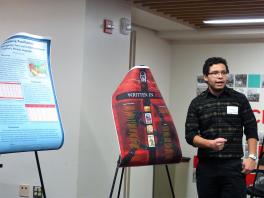 In the film, Eisenstein made great use of his developing theory of film structure — intellectual montage — to build layers of meaning through the juxtaposition of

images. This was criticized as being too complex for the masses to understand, and he was further ordered to remove sections of the film that portrayed Leon Trotsky. However, with the passing of time, film scholars and enthusiasts recognized the artistic importance of both the film and Eisenstein. Now, October is recognized as one of the greatest films in Russian cinema. Close to 100 people attended the screening with the audience enthusiastically following the film and its soundtrack.

On Oct. 27, DSEELC hosted Professor Boris Wolfson from Amherst College for the 2017 Oulanoff Memorial Lecture. The Oulanoff Memorial Lecture supports an annual speaker on Russian literature to honor the memory of Professor Hongor Oulanoff, one of the founding professors of the department. This year, Wolfson delivered the lecture, “Suicide by Theatre: The Force of Performance in Bulgakov’s World.” Wolfson discussed the career of Mikhail Bulgakov in both literature and theatre. He asserted that Bulgakov’s life and career in the 1920s and 1930s was more rooted in the theatre than the world of literature. After extensive analysis of Bulgakov’s and his wife’s personal notes, diaries and correspondence, a picture emerges of an artist fully emerged in the world of theatre, surrounded almost entirely by fellow theatre artists with significantly fewer connections to the literary circle of the time. While Bulgakov’s works of literature may now be for what he is most famous and are more frequently the subject of research, at the time, Wolfson contends that Bulgakov thought of himself as an artist of the theatre and this influenced his life greatly.

Arts, Humanities and the Russian Revolution 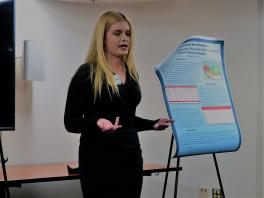 On Nov. 7, 2017, exactly 100 years from the Bolshevik Revolution, CSEES hosted a panel discussion that explored the arts and humanities in Russia in light of the

The panel began in earnest with Ballard’s presentation on Russian literature, which was concerned with how the Soviet regime promoted the ideal of “proletariat” art and encouraged non-artists to write and submit their work for publication. During this time, classic Russian works were revived and promoted throughout society, as well as the novel being reclaimed and revitalized. Other noteworthy themes throughout this period were the publication of darker, modernist works with dominant ironic and satiric themes. The Revolutionary ideal of creating a collective society was reflected in literature, as authors relinquished the self and embraced the collective.

Ignatieva followed Ballard’s lecture with an in-depth look into the evolution of Russian theatre in the years immediately following the October Revolution. She began with a meditation on the importance of the individual throughout Russian history and relating this trend to the work of Anatoly Lunacharsky who invented socialist realism theory and was able to convince Lenin to grant the Imperial Drama theatres the status of state and academic theatres. Ignatieva argued that theatres were crucial to communicating Lenin’s “monumental propaganda” campaign and the political and theatrical experiments conducted by Meyerhold, Tairov and Forregger on the stage. Finally, she discussed how the censorship of the 1920s affected the writing and producing of theatrical performances, and the eventual demotion and execution of Lunacharsky. Throughout her talk, Ignatieva reminded the audience of how the changes that occurred in the theatre after the October Revolution have lived on until today.

Svede’s talk explored the connection between the Revolution and fine arts by emphasizing the inherently multi-ethnic and gendered dimension of the Revolution and post-Revolutionary art. By examining the work of Soviet avant-garde artists, he demonstrated the participation that different ethnic groups and genders contributed toward the Revolution and early Soviet art. His presentation included creations by a number of multi-ethnic Soviet artists, including Marc Chagall, Kazimir Malevich, Klyment Redko, Aleksandr Deyneka, Ksenia Boguslavskaya, Vera Ermolaeva and many more. Just as Ballard discussed with literature, Svede affirmed that public participation in the fine arts was encouraged.

Following the three presentations, Burry moderated   a lively discussion with audience members and the panelists.

A Conversation with Steven Smith and Michael David-Fox

The Center for Slavic and East European Studies co-sponsored the event “Rethinking the Russian and Chinese Revolutions: A Centennial Conversation with Drs. Steve Smith and Michael David-Fox” with the Department of History’s Center for Historical Research. The two speakers participated in a conversation on Wednesday, Nov. 8 to a filled room in Thompson Library. The conversation focused on the proposition that there were multiple revolutions taking place in October 1917 and we should avoid the popular trend of reductionism that only focuses on the February and October Revolutions rather than examining the multiple layers of revolutions simultaneously occurring. Further, the two speakers compared a number of aspects of the Russian and Chinese revolutions. One example was civilian participation in the revolution; in Russia worker participation was spontaneous and came from the bottom-up, whereas in China the communist party mobilized the peasantry to engage in the revolution. Through their comparisons, they demonstrated the dynamic nature and multi-faceted layers of both revolutions.

The Impact of the Bolshevik Revolution at Home: Voices from Columbus

On Nov. 14, CSEES hosted a panel that examined the Bolshevik Revolution from the perspective of local residents whose lives were directly affected by the Russian Revolutions. The panel was chaired by George Kalbouss (emeritus, DSEELC) and included: Andrew Fedynsky (Resident Scholar, Ukrainian Museum-Archives, Cleveland), Gregory Proctor (emeritus, School of Music), Constance Oulanoff (retired, Columbus City Schools), and Oleksandr Debych (Visiting Fulbright Scholar). Each panelist had a family member whose emigration from Russia or Ukraine was connected to the Bolshevik Revolution. Debych’s story differed from the other panelists who all either immigrated to or were born in the U.S., while he was born and raised in Ukraine and after the dissolution of the Soviet Union, he discovered that he had a family member who immigrated to the U.S. With nothing more than a photo, he was determined to trace the journey of his relative and visit America to find his descendants. After many years of investigating, he successfully found some of his family members in Cleveland, Ohio.

A common theme arose throughout the panel, which was that a serendipitous act of an individual saved their family members from precarious, and often deadly, situations. If these opportunities would not have been granted, the panelists’ lives may have been very different.

To conclude the series of events, CSEES organized an undergraduate poster forum on Nov. 16. Seven students from Kenyon and Ohio State elected to participate in the event. Students were tasked with developing an original poster presentation on a topic of their choice related to the Russian Revolution, then giving a short presentation to a panel of judges.

Michelle McKenzie, a junior at Ohio State majoring in Linguistics and Russian, took first prize in the competition. Michelle focused her presentation on the disappearance of minority languages within the Soviet Union and looked at why that might be. Using data from a census before 1917, one in the 1930s and then one again in the 1970s, Michelle tracked the number of citizens who spoke these minority languages and how their numbers by and large decreased in this time period. She asserted that she believes that this at least in part can be attributed to the Soviet Union’s nationality policy, korenizatsiia, developed in the 1920s. While it officially promoted and recognized the different nationalities within the Soviet Union and their languages, by the 1930s the policy was less emphasized and resources were not provided to carry through with the goals of providing education, books and services in native languages. By the late 1930s, a distinct shift towards promoting the Russian language and culture was evident in government programs and policies.

Jonas Lopez, a sophomore majoring in aerospace engineering and astrophysics took second place in the competition. In his presentation, Jonas looked at the role of religion in Russia before and after the Revolution. Jonas argued that while the Soviet government officially was atheist and took steps to eliminate the church and reduce its influence, one can find religious imagery in many works of literature, or even propaganda from the years after the Revolution. In his opinion, this was because the church had occupied such a prominent place in Russian culture and its signs and allusions to it could be understood by so many people, that it was an effective way for conveying messages while also demonstrating the influence that it had on Russian society as a whole.