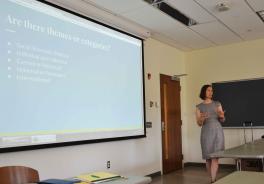 More than 20 middle and high school teachers from across Ohio attended the weeklong institute with the goal of deepening their knowledge on human rights and finding new content and resources to incorporate into their curricula. Tami Augustine (Ohio State Department of Teaching and Learning) and Jennifer Suchland (Slavic and East European Languages and Cultures; Department of Women’s, Gender and Sexuality Studies) were lead facilitators of the workshop.

provided teachers with a firm foundation in the development and evolution of the human rights protection regime and introduced them to critical human rights theory and contradictions in the implementation of universal rights.

After a day and a half exploring how we perceive of and practice human rights, the next stage of the workshop focused on four case studies of mass atrocity and state-sponsored violence. For the Eastern European and Middle Eastern content, Khatchig Mouradian (Columbia University) delivered the content for the Center for Slavic and East European Studies as well as for the Middle East Studies Center. 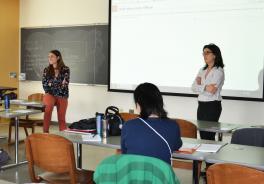 He discussed the legal history of the crime of genocide with a focus on Armenia. His presentation provided teachers with a framework for how to empower victims and survivors of genocide by including their voices in the historical narrative, rather than only focusing on the crimes of the perpetrators.

The second case study was sponsored by the East Asian Studies Center and it examined state-sponsored violence in North Korea. During his presentation, Mitch Lerner (Department of History) traced the brutal history of North Korea and gave insight into how the Kim family has maintained absolute power for more than 60 years. In addition to his presentation, Lerner screened the documentary Camp 14: Total Control Zone, which was narrated by a man who had escaped from a North Korean work camp. 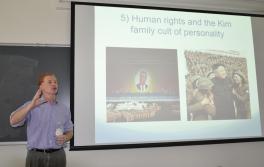 diaspora. Mohamed focused on the legacy of colonialism in Somalia, Siad Barre’s rule and the 1991 collapse of the country and ensuing civil war. He also discussed the Somali diaspora and Somali immigrants in Ohio, giving teachers valuable inter-cultural communication skills that will allow them to better understand how to serve their Somali students.

For the final case study, the Center for Latin American Studies invited Laura Fernandez, assistant dean of graduate and international students, Ohio State Moritz College of Law, who discussed the Colombian Civil War and the FARC Peace Agreement within the transitional justice framework. Transitional justice is a multi-layered mechanism that promotes reconciliation after violent conflict through judicial and non-judicial means and seeks to address the needs of victims. Fernandez also led the teachers through a dispute-resolution exercise that can be used in their classrooms to solve conflicts and promote effective communication.

The institute also aimed to connect the global with the local; to do so, CSEES invited local human rights activists to discuss their initiatives here in Columbus. Angie

Plummer, executive director, Community Refugee and Immigration Services (CRIS), discussed refugee resettlement in Columbus, focusing on how refugees reach our community and what challenges they face upon arrival. On the last day, Sophia Papadimos from the Ohio Human Trafficking Task Force led a working lunch that showcased local initiatives that seek to support victims of human trafficking and influence legislators to enact laws that provide more protections against sex and labor trafficking. 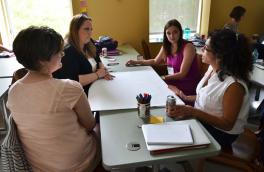 The institute was made possible by Title VI funding from the U.S. Department of Education and an Ohio Humanities Educator Enrichment Grant. The grant has

provided funding for six months of follow-up consultations with the teachers to continue to provide them with human rights resources, curricular advice and classroom visits.