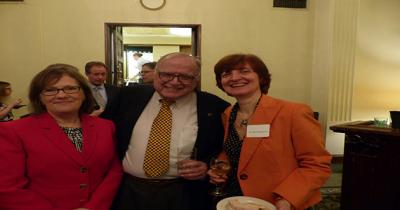 East European Studies (CSEES). The conference kicked off on Friday with a keynote address by Karen Dawisha, the Walter E. Havighurst Professor of Political Science in the Department of Political Science at Miami University, focusing on her most recent book, Putin's Kleptocracy: Who Owns Russia? and followed by a reception at the Faculty Club.

Dawisha argued in her address that Russian President Vladimir Putin and his associates have systematically used their power and government positions to amass wealth and control politics. At the same time, the political opposition has been marginalized and silenced with threats. While the true people behind the murder of Boris Nemtsov will almost certainly never be found, or the motives behind their actions never fully known, it is clear Nemtsov was one of the most outspoken government critics who compiled data and published extensive reports on corruption. That voice will be missing in the future. 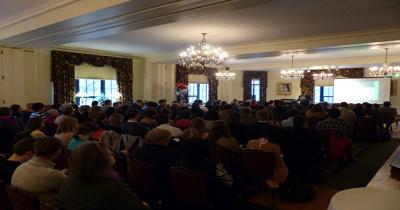 To close her talk, Dawisha posed the question, what is the larger implication of Russia being a kleptocracy to the West? Corruption and money laundering not only costs the Russian economy roughly $300 billion a year, impairing its long-term growth, but this money is then used to fund black market economies in the West. In the short-term, there is little possibility of change. If Putin leaves office, in Dawisha's opinion, one of his associates simply would step in in order to ensure the status-quo.

On Saturday morning, more than 175 attendees braved the inclement weather to attend the first day of conference panels to learn about the culture, literature, 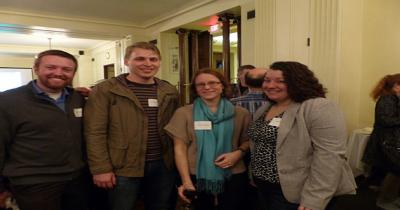 During the lunch break, staff from Ohio State’s Thompson Library hosted an open house for MWSC participants. Guests viewed a selection of rare books and manuscripts pulled from the East European and Slavic Studies Collection, which in its entirety consists of over one million items. The display showcased the resources that Ohio State is fortunate to possess and allows scholars from across the region to see what the university has to offer in terms of materials for future research.

As a conclusion to day one of the conference, a social mixer for undergraduate and graduate students was held at Woody’s Tavern.

On Sunday, many participants were eager and ready to begin the shortened day of panels. The final day of the conference featured a wide array of topics ranging from religion and society in Russia to Tolstoy and Dostoevsky.

The Center for Slavic and East European Studies would like to thank everyone who helped out and participated in the conference. By all accounts, the 2015 Midwest

Slavic Conference was a success.