During the summer of 2014, I interned at the Kino Lab at the Center for Contemporary Arts, located at Ujazdow Castle in Warsaw, Poland. The castle is a very old 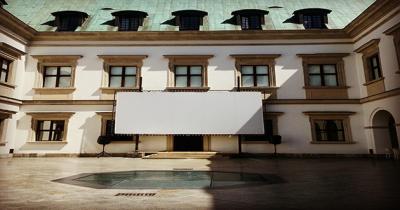 place, mostly destroyed in the razing of Warsaw after the Warsaw Uprising in 1944. The Center for Contemporary Arts is a modern art museum, whose exhibits change from time to time. The Kino Lab’s focus is on art house, experimental, theatrical and independent films, but a few stray mainstream ones find their way into the special events and repertoire.

Every summer, the theater puts on a special program. This past summer it was “Low Budget Cinema,” featuring some of my favorite low budget B-horror movies. I was really excited to help plan and get materials for it, mainly because there is a soft spot in my heart for Evil Dead and The Blair Witch Project. I wound up making some of the promotional materials for the programs each week and ran subtitles for the movies where Polish subtitles were not available on the DVD. I also helped with some of the other programs, including getting the films from their producers. If nothing else, I overcame my prideful habit of not asking for directions, because I am still hopeless finding my way around new places. My mentors even brought me to a few screenings. When I was not busy with Kino Lab, I also helped the advertising department for the museum.

It seemed like everything interesting happened in Warsaw over the summer. The first week, President Obama came to speak in Old Town Square on Poland’s 25th anniversary of free and fair elections. The speech was pretty par for the course for content—Russia’s aggression in Ukraine cannot and must not be tolerated—but it was so interesting how free elections happened to dovetail so neatly with the Ukraine crisis. At any rate, the crowd received the speech well, and remembering our president clumsily thanking the crowd in Polish never fails to please me.

It was also the 70th anniversary of the general Warsaw Uprising—the actual anniversary was August 1. I was home by then, but the entire city spent the summer 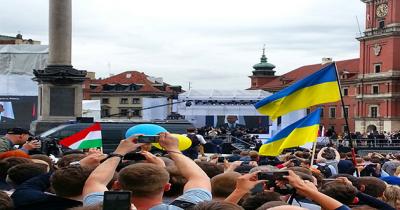 preparing for it. The uprising started on August 1, 1944, and lasted 63 days before lack of supplies and the aggressive German military forced the poorly armed Polish resistance to surrender. Almost 200,000 people were killed in the fighting. The Nazis expelled survivors and razed the city. Not long after, Soviet forces entered the city and the uprising would remain an officially taboo subject until 1989. Since Poles still feel enormous pride regarding this event, being in the city, visiting museum exhibits, attending film screenings and taking in other events commemorating it was a powerful experience.

My favorite thing happened when I was on a night run through Novy Praga, a fantastic neighborhood on the other side of the bridge. I wound up unintentionally jumping into the Warsaw Uprising Run, an annual run commemorating the uprising.

Overall, my summer experience in Warsaw was wonderful. I got completed some of the research I intended to do, met some great people and came home with some valuable skills working in a different office environment.