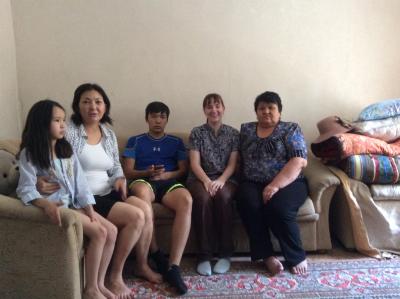 Studies program (FLAS). She also won a year-long fellowship to fund her Russian studies at Ohio State this year. CSEES was able to meet up with her recently to talk about her experience with the FLAS program, study abroad, as well as her plans for the future.

What spurred your interest in Russian?

When I was really little I was interested in Russia because it was one of the largest countries in the world, and from a very simple perspective, I thought “Oh, well that’s interesting!” In high school, I took French -- I started taking French in eighth grade, and I really enjoyed taking a foreign language. So I thought that it would be interesting to learn another language, so I started teaching myself Russian in high school, but that went very poorly because my family is very English and I have no background experience in Russian, and when you’re in high school teaching yourself a language, obviously, you’re not going to get very far. And then, I got to college, and my French major was coming along really fast, and I thought, well, I need something else to fill up my time here, and I needed to get a minor or another major, and I already knew a tiny bit of Russian, so I thought I might as well add it on. And I’m also interested in trying to get a job in Russian, because French is not extremely - is not as useful to the United States government as Russian is, and I thought that would be a good place to start.

What gave you the idea to study abroad in Kyrgyzstan?

I was looking for places to study abroad, and I had already studied abroad in Quebec City, and I really enjoyed the experience and it made me realize just how valuable studying abroad was. I thought I would never get another chance to study abroad because it’s so expensive. I was talking with Dr. Brintlinger before she left on sabbatical about whether there were some programs that she recommended and one of the ones she recommended was Arizona State’s programs for studying Russian. The Kyrgyzstan program was on her list of recommendations, so I thought it would be really unique to go to a country that most people in the United States don’t even know exists, as opposed to just going to Russia. But also at the same time, there was more government money available for studying outside of Russia because of the government issues between the two.

What would you say was the most enriching part of your experience?

I really, really enjoyed living in a host family in the capital city, Bishkek. Going to classes was great, but at the same time living with a host family is something that I think most people can agree you can’t really - you can’t learn that in a classroom. I lived with my host family who was natively Kyrgyz, they weren’t Russians who had moved to Kyrgyzstan, but most of them spoke Russian and not Kyrgyz, and I got to experience things like their religious holidays, the end of Ramadan was during my time while I was over there. There was a death in the family, and I learned a lot about the customs around that. The education for the children was different because one was an older boy and a younger girl. I got to meet their family members and neighbors and friends around the city, and actually travel a little bit with their neighbors, which was weird, but also very fun, and just learn how the people are and think is something, you know, you can’t get so easily just from reading something. It’s cool and kind of scary to live it instead. Studying abroad is definitely one hundred percent worth it, and I would do it again.

Where would you go if you could study abroad again?

I would probably be interested in studying abroad depending on the language, because I’ve done a study abroad for French and Russian. My French is okay enough that I think I would benefit more from doing one in a Russian-speaking country again, since my Russian is not as good as my French. I’m also interested in picking up Chinese or Arabic to fully get my government-important languages in. It would be really fascinating to go to Kyrgyzstan again, one, because I really was interested in it, and also it’s close to China, so maybe I could do something in China, or in the Uyghur region in western China. Anywhere in Asia, I think, holds my interest a lot.

How has the FLAS program helped you study abroad?

I would have never been able to study abroad without the support of the FLAS program. It also has helped me in coming back to Ohio State by keeping my classes topical to study abroad. I’m in a class right now that I wouldn’t have known about except for the FLAS program coordinator mentioned it that deals with Central Asia, including Kyrgyzstan as well as Uzbekistan. It’s really interesting to compare the education I got there versus the one I’m getting here about those countries. And also, just keeping me aware of other study abroad programs, what other study abroad programs are like and what countries they’re in, and potential future opportunities, but I think the most valuable was the fact that I could actually afford to go, which I never would have been able to do and I feel so lucky that I got to. How many Americans can say that they’ve lived in Kyrgyzstan for two months? I mean, that’s really special.

What would you say to other students considering applying for a fellowship?

Do it! Especially if you’re interested in government job opportunities. I know FLAS, since it’s a government-funded program, is really looking for students who are interested in that, and I certainly am, and I believe that helps me, and now I’m looking for government job placement opportunities at the moment, and I feel pretty qualified for some because of my experience. Apply as early as you can and apply for both the full year and the summer scholarship because I did and I actually won both.

And it’s really made this last year so much more beneficial to me, I’ve gotten so much more out of it from being able to really focus on Russian as a language and the countries that use Russian. I got to live in one of those countries, and it was so much easier to do that and not have to worry about so much financial responsibility. With my mother passing away and stuff like that, I almost considered leaving school for a year, but thanks to the fellowship, I didn’t have to worry about that, and I could get my education done now, which I am so thankful for. So anybody who’s interested in it, especially for financial reasons or if they want to work in the government and think “I could benefit from studying abroad” in one of these sponsored programs, I’d say apply early, do your research, and show up to the informational sessions.