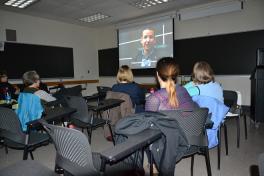 The annual Midwest Slavic Conference Teacher Training workshop was held on Saturday, April 8 in Mendenhall Laboratory and was open to pre-service and in-service

Ohio K-12 teachers. CSEES Outreach Coordinator Kathryn Metz led the 2017 workshop titled “When Borders are Closed: Refugees, Smugglers and Humanitarian Aid along the Closed Balkan Route.” The content of the workshop dealt with the Hungarian border fence and its implications for refugees who remain outside of the Schengen zone and the aid workers who provide vital supplies for them.

The content of the workshop was based on Metz’s February 2017 fieldwork in Hungary and Serbia, where she met with representatives from local NGOs, inter-governmental agencies, refugees and border agents. These interviews provided a human dimension to the legalistic framework and political discourse that is present in the region and dictates the policies that affect the refugees.

Thirteen teachers participated in the workshop. Some were drawn to the subject matter because they teach units on immigration and they wanted to revise their lesson plans to include information on migration along the so-called “Balkan Route.” Others teach classes with high numbers of refugees and immigrants and they wanted to learn more about the conditions some of their students have experienced before coming to the United States.

The workshop began with an overview of the European asylum system, including analysis of the Dublin Regulation, the European Union (EU) – Turkey Agreement and the EU refugee relocation scheme. It also included a brief history of the refugee crisis in the Balkans since June 2015, and trends of xenophobia and anti-migrant rhetoric throughout the Visegrad 4 countries, as well as the Hungarian border fence(s) and the increasingly strict asylum laws promulgated by Budapest. Metz weaved in the voices from the field to illustrate how refugees are stuck on the fringes of the EU without viable legal mechanisms to apply for asylum, prompting them to rely on the services of smugglers to sneak them across borders. She also discussed how aid societies in Serbia and Hungary have quickly built capacity to deal with the influx of people since 2015 and how they continue to serve these populations through supplies’ distribution, psychosocial support, educational opportunities and legal advice.  While governments are turning their back on refugees, aid societies are enhancing their support.

The workshop concluded with a screening of the Dutch documentary Dancing on a Razor’s Edge, which was filmed in Hungary in the spring of 2016. The film consisted of interviews with Hungarian political leaders, civil society members, refugees, students and activists in order to show the differences of opinion regarding the Hungarian border fence. The film contrasted extremist voices with moderates and liberals, showing that within Hungarian society there are many different beliefs about the enforcement of border protection.

By the end of the workshop, the teachers were brimming with ideas of how to use the content in their classrooms and eager to share their new knowledge with their students. For their participation, the teachers received a copy of The New Odyssey: The Story of Europe’s Refugee Crisis by Patrick Kingsley, a contact hour certificate and a $50 stipend.  The teachers have until June 1 to create a lesson plan incorporating the content from the workshop into their curriculum.