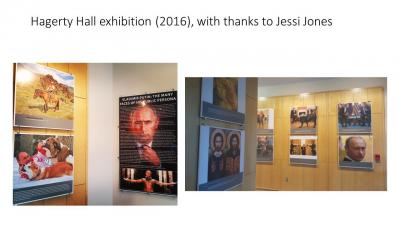 Pietro Shakarian on Mount Ararat and its Historical Importance

CSEES was pleased to offer the opportunity for a graduate student to give a lecture at Ohio State for a second time this academic year. In January, Pietro Shakarian, PhD student in the Department of History, presented an engaging lecture on the Baltic-German explorer Friedrich Parrot’s 1829 journey to Mount Ararat.

Mount Ararat is a very symbolic and significant land form in the Caucasus region. Some believe it to be the resting place of Noah’s Ark. Although the mountain is in present-day Turkey, it once lay within Armenian territory and has thus become a national symbol for the country.

Shakarian chronicled the history of Parrot’s journey to Armenia, including the socio-political environment in the Caucasus region in the mid-19th century and the challenges Parrot faced while undertaking his expedition. He also connected the historical dimension to the current political relationship between Turkey and Russia, detailing long-standing diplomatic tensions that have interrupted periods of peace and partnership between the two nations.

His lecture was based on Parrot’s 1846 book, Journey to Ararat, which was republished in 2016 by the Gomidas Institute, for which Shakarian wrote the critical introduction. If you missed the lecture, you can stream it on our YouTube channel.

Goscilo Explored the Domestic and International Face of Putin 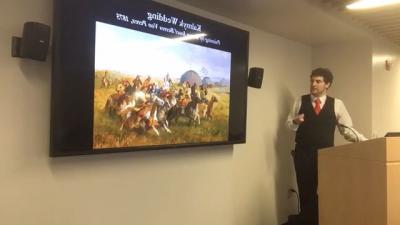 Persistent allegations of Russian tampering with 2016 U.S. elections and mass public protests in Russia continue to demonstrate why the talk given by Professor

Helena Goscilo of the Department of Slavic and East European Languages and Cultures — Desires and Devices in Putin’s Russia, with an Eye on the West, — is as relevant now as it was then. In her presentation on February 17, Goscilo, analyzed Putin’s path to Russia’s presidency and reasons for his longevity. Illustrated with a fascinating set of photos that were often amusing and sometimes bizarre to the western viewer, Professor Goscilo illuminated Putin’s manipulation and marketing of his image in Russia and the West. She accompanied the illustrations with a narration of Putin’s political ascendance and his relationship with the current U.S. president. Her talk to a standing-room-only audience offered intriguing insights into the motivations and machinations of a vaunted public icon that have led to Putin’s proclaimed status as “the most powerful man in the world.” The audio of the talk and PowerPoint have been uploaded to YouTube.

CSEES welcomed David Laitin, the James T. Watkins the Fourth and Elise V. Watkins Professor of Political Science at Stanford University, as the Graduate Student Choice Speaker for 2016-2017. Laitin revisited his 1998 work, Identity in Formation: The Russian-Speaking Populations in the Near Abroad, which analyzed the extent to which Russian speakers outside of the Russian Federation assimilated into their new countries after the fall of the Soviet Union.

This group of Russian speakers was described by Laitin as a “beached diaspora,” highlighting the fact their country’s borders receded away from them. With the collapse of the Soviet Union, they found themselves living in a new country, often as a minority in a country that was not majority Russian or ethnically homogenous. Laitin found the “Russian-speaking population” abroad to be a new identity within post-Soviet space. He summarized his major findings and analyzed where he went right and what he may have changed. Students related his findings to various conflicts occurring today throughout Eastern Europe, including in Ukraine. CSEES would like to thank Professor Laitin for his talk as well as everyone who attended and participated in a very enlightening discussion.

Sergei Abashin, anthropology professor, European University at St. Petersburg, visited Ohio State in late March to deliver the talk “Regulating Flows of People Across Eurasia: Migration Policy in the Russian Federation.” Abashin specializes in migration studies and Central Asian nationality building. His talk focused on the evolution of the Russian Federation’s policies in regards to migrants and refugees since 1992.

A key point of Abashin’s talk was that policies often change and are based on political objectives or sentiments, without thorough consideration or consultation with experts. In the 1990s, the Russian government had a looser migration policy, using language such as “compatriots,” those with a connection to Russian culture and language living outside the Russian federation, “refugees,” non-Russians fleeing conflict or economic conditions, and “displaced persons,” ethnic Russians who had to leave a country or region because of conflict or war, to denote different categories in a climate that was overall open to migration flows. However, as time progressed, the government changed the language, at times trying to distinguish between wanted and unwanted groups, or establishing policies and procedures for formalizing the means of migration to Russia.

In 2012, there was a fundamental shift in the government’s policy as the result of two policy documents that were said to have the at least tacit support of President Vladimir Putin. Earlier in his presidency, Putin viewed illegal migration as an issue that could have both positive and negative consequences for Russia. These documents acknowledged that migration could help Russia in terms of its demographic crisis and stagnating economy, but also that it can lead to conflict and be viewed or used by some as a national threat. In 2013, for the first time, you saw the introduction of migration policies as a political campaign topic in the mayoral election of Moscow. This made migration a growing political issue in the public debate and resulted in tightening legal migration and the implementation of such policies as a new test that applicants must take for legal status. The talk ended with the hope that experts in migration be brought into relevant policy discussions to develop clearer and less reactionary policies. The full talk can be watched on CSEES’ YouTube channel.