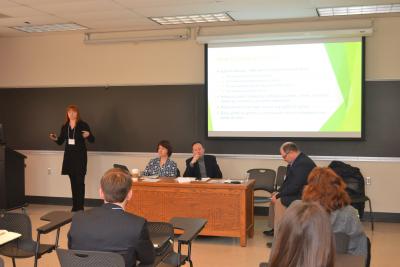 The Center for Slavic and East European Studies and the Midwest Slavic Association hosted the annual Midwest Slavic Conference at Ohio State from March 23-25. The conference attracted more than 75 panelists from 35 different institutions, from Ohio, the Midwest, across the United States and abroad.

Tara Zahra (University of Chicago) opened the conference with a keynote address based on her latest book The Great Departure: Mass Migration from Eastern Europe and the Making of the Free World. Throughout the lecture, Zahra weaved in a story of Jewish travel agents who were convicted of coercing people to emigrate from Poland to the New World. The case, she argued, was emblematic of the attempts by Central European states to restrict the movement of their citizens, many of whom had caught the American fever and were pining to move to the New World. However, when it came to the movement of ethnic minorities, they were granted more freedom to leave. While the lecture focused on migration patterns that occurred more than a hundred years ago, the audience observed the historical similarities to contemporary migration policies that aim to limit the movement of individuals to the U.S. 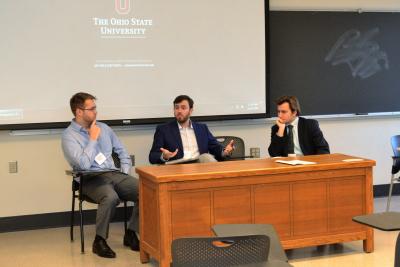 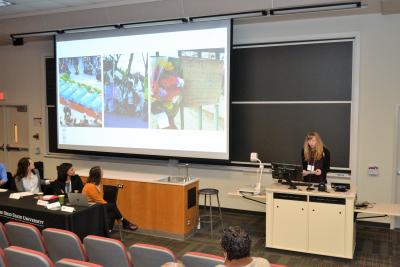 The panelists addressed migration from the perspective of their world region: Cohen discussed ‘cultures of migration’ from Latin America to the U.S. in the face of rising xenophobia; Lee presented on forced deportations of Koreans from the far eastern parts of the Soviet Union to Central Asia; Paynter examined Africa to Europe migration through the lens of post-colonialism; Rucker-Chang explained how Chinese migrants have been received and perceived in the Balkans and depicted in South Slavic film; and Sellman discussed the role migration plays in speculative Arabic literature. While each speaker focused on regional attributes of mobility, there were common themes touched upon by all the speakers, such as cultural and self-identity among migrant populations, and the emergence of vocalized hostility and xenophobia toward migrant populations in receiving countries. 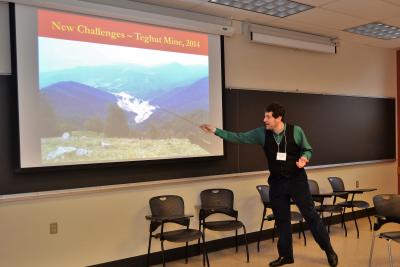 Conference panels began at 10:45 a.m. on Saturday morning and ran until Sunday at 11:45 a.m. Presenters addressed interdisciplinary topics in Eastern European and Eurasian studies. More than a quarter of the presented papers focused on migration related topics in film, literature, social science, history and linguistics. The 2019 Midwest Slavic Conference will take place on April 5-7.