Supporting K-12 Programming Throughout the State 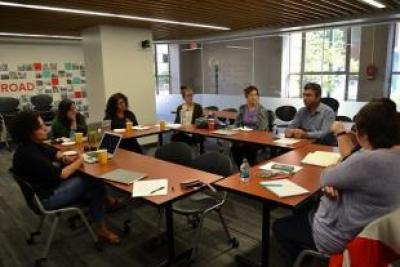 The Center for Slavic and East European Studies has had another robust academic year of outreach programming for K-12 students and teachers. The Center has been hard at work spreading knowledge about Eastern Europe and Eurasia through classroom visits, Saturday workshops for teachers, and the continuation of the Columbus North International School Russian language and Eastern European Culture course. 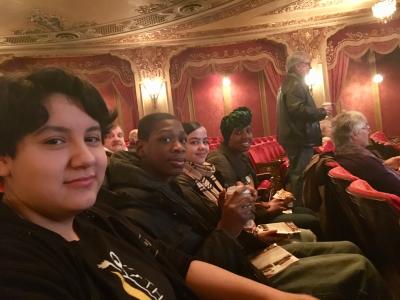 More than 60 K-12 teachers attended the five sessions, traveling to Columbus from across the state of Ohio to participate in the discussion group that ran for two hours on Saturday mornings. Prior to each session, participants received a pre-reading assignment. The session began with a presentation delivered by a professor or graduate student who researches human mobility and the sessions covered themes such as irregular migration along the Balkan route, gendered aspects of Middle Eastern migration, migration through a post-colonial lens, coming of age as an undocumented youth in America, and internal migration in China. 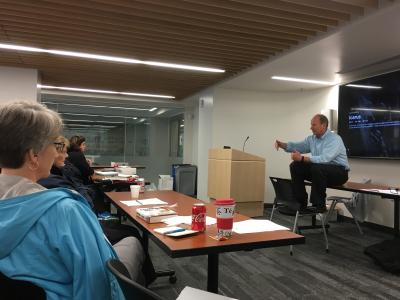 Following the presentations, the group discussed the readings and the content delivered in the lecture, as well as the challenges they face in their classrooms. Teachers wanted to learn more about contemporary issues in migration so that they could better instruct their students on the topic, as well as to discuss ways to create inclusive environments to accommodate the needs of refugee and immigrant students in their classrooms.

A similar teacher training program will run in the 2018-2019 school year for K12 teachers dealing with another topical issue and supported by the five area studies centers in the Office of International Affairs.

During the spring semester of 2018, CSEES has organized ten outreach visits to schools across the state to spread knowledge about Eastern Europe to primary and secondary school students and to promote Slavic and East European studies at Ohio State.

Dr. Dan Collins (Department of Slavic and Eastern European Languages and Cultures) visited six classes at Walnut Hills High School on February 12 to meet with Russian language students and encourage them to study Russian at Ohio State. He also presented on Maslenitsa and Russian culture.

Additional outreach visits were made by CSEES outreach coordinator Kathryn Metz to Johnny Cake Corners Elementary School in Galena to give a presentation to first grade students on Russian and Hungarian culture; to Indian Hills High School in Cincinnati to give a lecture on the ‘Gay Propaganda’ law in Russia and LGBTQI rights in Eastern Europe more broadly; and multiple visits to the Global Scholars Diploma seminars at Franklin University organized by the Columbus Council on World Affairs to speak to high school students about migration along the Balkan route.

The Columbus North International School Russian and Eastern European Culture students visited the Columbus Symphony Orchestra to watch the dress rehearsal of the Second Russian Winter Festival on February 9. The performance included Dmitri Shostakovich’s Concerto in A Minor for Violin and Orchestra, Op. 99 and Sergei Rachmaninoff’s Symphony No. 2 in E Minor, Op. 27.

Having studied both composers in class, the students were amazed to hear their compositions performed live especially in the splendid venue of the Ohio Theatre.

On Saturday, May 5, CSEES organized the K-12 Teacher Training Workshop “The Rise and Fall of the Eastern Bloc Sport System.” Dr. Steven Dawson, Professor of Health, Fitness and Sport at Wittenberg University, led the workshop. His presentation examined the way sport was used in the USSR and Eastern Bloc to create a fit nation that was structured to serve the state. He discussed the evolution of sport in the USSR and satellite countries and how the creation of a physical culture bred competitive athletes who performed well at the Olympic games, which put the USSR and GDR on the world map. He also looked at the dangers caused by the heavy emphasis on sport, including the health consequences of doping and the struggles faced by former athletes once their careers ended.

In the second half of the workshop, the participants watched the film Icarus, which investigates state-sponsored doping in Russia through the perspective of Grigory Rodchenkov, the former head of the Russian anti-doping laboratory. By the end of the workshop, the participants compared sports culture in the Russia and the USA by critically examining the pressures put on athletes in both countries.