During the spring of 2016, CSEES held a number of exciting lectures and workshops at Ohio State: 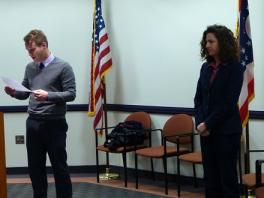 On January 20, the Russian playwright, screenwriter, and director Alexander Galin gave a lecture at Ohio State.

This event was co-sponsored by the Department of Slavic and East European Languages and Cultures and the Department of Theatre. Galin discussed how his interests in theatre and career started in the small town of Kursk, his subsequent studies in Saint Petersburg and his early works. By depicting the daily lives of Soviet citizens and the prominent social themes of the time, Galin described the changing culture of the Soviet Union in the 70s and 80s. Galin’s most recent play, Parade, continues in this tradition in its portrayal of new Russian totalitarianism. Over the decades, Galin’s plays have been staged throughout the Soviet Union, Russia and countries all across the globe.

Languages and Cultures, co-sponsored the Iron Curtain Crossings workshop at the Mershon Center for International Security Studies. The workshop examined the multipolar interactions between the First, Second, and Third Worlds during the Cold War, rather than the previously conceived perception that there was a bipolar political confrontation between the communist East and the capitalist West. The workshop investigated the variety of ways that Eastern Europe emerged as an important international player, by promoting its own ideas of modernity, progress, humanism, culture and everyday life. Theodora Dragostinova and Malgorzata Fidelis, professor, history, University of Illinois-Chicago, organized the workshop. Panelists came from across the country to participate.

Maureen Pritchard on Music in Kyrgyzstan

On March 28, Dr. Maureen Prichard of the Central Eurasian Studies Society gave a lecture about music and

ethnicity in Kyrgyzstan. She explored the interrelationship between music and various aspects of culture in its ability to create a sense of belonging or exclusion. The lecture detailed how the Soviet racial imagination impacts musicians in contemporary Kyrgyzstan.

On April 5, CSEES co-hosted with the Mershon Center for International Security Studies a lecture by Dr. Robin Brooks, Davis Fellow, Columbia University School of International and Public Affairs; and foreign service officer, U.S. Department of State. Brooks’ lecture, “Reactors, Russia-Centrism, and the U.S. Relations with Eastern Europe,” focused on how the U.S. damaged its national interests and those of Eastern Europe by prioritizing competition with Russia rather than bilateral relations with other nations in the region. She argued this position by examining U.S. support for European energy and security independence through the case study of Westinghouse’s bid to build nuclear power plants in Bulgaria, Czech Republic and Hungary, and the efforts to prevent the construction of Russia’s South Stream gas pipeline in these countries. Brooks has been a foreign service officer since 2004, serving on the U.S. Mission to the OSCE, U.S. Embassies in Moscow, Sofia, and Ankara, and as chief of staff to the Special Representative for Afghanistan and Pakistan.

University, to present a lecture based on her 2014 book, Sex, Politics, and Putin: Political Legitimacy in Russia. Each year, CSEES graduate students select a speaker to invite to Ohio State. Sperling explained how both politicians and youth political organizations use masculinity and femininity to either support or discredit their political power. She used the example of the “Happy Birthday, Mr. Putin” erotic calendar that showcased 12 female journalism students from Moscow State University in order to show how the feminization and objectification of women is used to increase the virility and strength of Putin’s masculinity. At the end of the lecture, Sperling expanded her thesis to include ways in which sexuality is used by the candidates in the 2016 U.S. presidential election.

On April 27, the Slovene Research Initiative welcomed two Slovene scholars, Simona Zavratnik, faculty of social sciences, University of Ljubljana and Sanja Cukut Krilic, research fellow, Slovenian Academy of Sciences and Arts. Zavratnik and Krilic lectured on the four waves of immigration to Slovenia from the time that it was part of Yugoslavia, experiencing mostly internal migration from the poorer republics, to the present day with an influx of immigrants from Arab countries. They examined how public opinion perceives this migration and the challenges faced by Slovenia with the arrival of transients that are attempting to cross into Europe.

CSEES hosted three professionalization events for graduate students this past spring. On February 4, Peter Marzalik, Ohio State alumnus and former FLAS fellow, met with current students over Skype to discuss his roles in various organizations, such as the Columbus International Program, the Hudson Institute, Eurasia Foundation and the International Affairs Review. Students had the opportunity to ask him questions about the positions he has held and the transition he made from working in Columbus to Washington, D.C.

On March 3, students met with Patrick Terrien, CEO and president of the Columbus Council on World Affairs (CCWA). In his capacity at CCWA, Terrien has worked to increase international and cross-cultural events in Columbus, forge relationships with local companies that do business abroad, and promote intercultural education in Columbus schools. Terrien discussed the work of CCWA with the graduate students and gave them tips on what to consider when pursuing careers with similar organizations.

On April 5, Robin Brooks met with students to talk about working as a foreign service officer (FSO). She provided information about the FSO test and skills/experiences that should be pursued in order to prepare oneself for the career.

CSEES hosted two outreach events with community colleges this past spring. The first event was a roundtable discussion on April 5 at Lakeland Community College in Cleveland and was entitled, “A Discussion of the Refugee Crisis in Europe from the German and Balkan Perspectives.” Two graduate students from Ohio State hosted the roundtable. Carolyn Morgan is a doctoral candidate in comparative politics and political psychology at Ohio State and her research examines Turkish communities in Germany, while Sanja Kadric is a doctoral candidate in the Department of History, who spoke on the history of Muslims and non-Muslims in the Balkans at the roundtable.

CSEES sponsored a workshop with Bluegrass Community and Technical College (BCTC) on May 6 at Ohio State entitled, “Human Rights, Peace Building and International Security.” Three scholars, Julie Hart, associate professor of sociology at Ohio Dominican University; Stephen Porter, assistant professor of history at the University of Cincinnati; and Lauren Muscott, graduate student in political science at Ohio State, presented their research and engaged the BCTC participants in a lively discussion on these themes. The final section of the workshop examined two case studies of frozen conflicts in Eastern Europe, in which the participants applied the knowledge they had learned from the scholars to these unresolved conflicts.