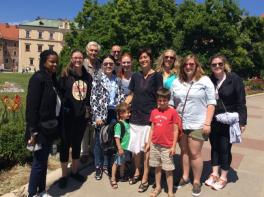 The Cross-National Studies: Interdisciplinary Research and Training program (CONSIRT) conducted a variety of

activities in the 2014-15 and 2015-16 academic years to further the study of Central and Eastern Europe from a social science perspective.

In May 2015, CONSIRT organized the workshop “Health and Well-Being in Cross-National Perspective” in Columbus, Ohio, in collaboration with the Polish Academy of Sciences (PAN), Center for Slavic and East European Studies, the Mershon Center for International Security Studies and the Department of Sociology. The event brought together scholars from the social sciences and public health to explore in a cross-national perspective the substantive and methodological directions that lead to new, emergent knowledge of health and well-being.

Day two focused on Central and Eastern Europe. It explored the possibilities that quantitative methodology opens for research design and analysis in this field, as scholars can use international public opinion surveys such as the European Social Survey (ESS), or national longitudinal surveys, like the Polish Panel Survey (POLPAN), together with macro-level indicators. Lectures were given by Kazimierz M. Slomczynski (professor at PAN, professor emeritus, Ohio State Department of Sociology, and director of CONSIRT) and Irina Tomescu-Dubrow and Joshua K. Dubrow (associate professors at PAN and part of CONSIRT administration). Day two also featured a presentation by Colin Odden.

This two-day workshop was open, free of charge, to Ohio State graduate and undergraduate students, as well as to scholars from across Ohio State, interested in health and well-being in a cross-national perspective. It promoted quantitative awareness and literacy, and interdisciplinary collaboration.

Following the Health and Well-Being in Cross-National Perspective workshop, CONSIRT then organized the international workshop “Cross-National Survey Harmonization and Analysis: Weights, Data Quality, and Multi-Level Modeling” also in Columbus, Ohio in May 2015. This was organized in collaboration with the Mershon Center for International Security Studies, and with financial support from the Polish National Science Centre, the Ohio State Departments of Political Science and Sociology, and the Polish Studies Initiative.

In keeping with one of CONSIRT’s main objectives — to enhance students’ educational and professional training and facilitate their international collaboration —  the workshop taught graduate students, via lectures and computer labs, how to employ survey weights, information on the quality of survey data, and multilevel modeling to address methodological and substantive problems in quantitative social science research. An interdisciplinary mix of 12 Ohio State graduate students, 10 from sociology, political science and communication and two from the Graduate School for Social Research of the Polish Academy of Sciences, were selected to participate in the workshop.

Scholars from Poland and the U.S., including Professors Slomczynski, Tomescu-Dubrow, Marcin Zielinski, associate professor, University of Warsaw, and Robert M. Kunovich, associate professor, University of Texas-Austin, delivered the lectures. As part of their training, students used a dataset consisting of European countries and the U.S., constructed via ex-post harmonization of various international survey projects, including the World Values Survey, International Social Survey Program and the European Social Survey. Participation was free of charge.

In summer 2015, CONSIRT also administered an Ohio State study abroad program in Poland, Central and Eastern Europe in Comparative Perspective: Assessing Social and Political Change. Professors Slomczynski and Irina Tomescu-Dubrow served as co-directors. The Warsaw Summer School in Social Sciences is an intellectually stimulating training and research program offered in Poland at the Polish Academy of Sciences. Students engage in five weeks of classroom instruction and research in Warsaw, and have individual consultations with faculty both prior to going to Warsaw, and after their return to Ohio State. This interdisciplinary program contains two tracks, one for undergraduates and one for graduate students, to provide students at different academic levels the opportunity to engage firsthand in studying post-communist European countries in comparative perspective. Field trips, including to Lodz and Krakow, and cultural activities complement classroom work. In addition to lectures, discussions and walking tours, students visit important historical spaces, such as the Warsaw Ghetto and Auschwitz, and 21st century interactive museums, such as the Museum of the 1944 Warsaw Uprising and the Oscar Schindler Factory Museum. Taken together, these activities provide a unique and holistic educational study abroad experience. The Warsaw Summer School in Social Sciences is an annual study abroad program. Interested students should contact Irina Tomescu-Dubrow (Tomescu.1@osu.edu).

In summer 2015, eight Ohio State students from the Department of Sociology and the Department of Political Science, and the Undergraduate International Studies Program, participated in the Warsaw Summer School. We congratulate them on their excellent performance during the program and obtaining grants for research and their 2015 study abroad in Poland. The awards and their recipients are:

Look for more updates on the summer 2016 Warsaw Summer School and CONSIRT’s other 2016 activities in the fall!