During the autumn 2015 semester, the Center for Slavic and East European Studies organized or co-sponsored five lectures on campus and a round table, “Refugee Crisis in Central and Southeastern Europe.” 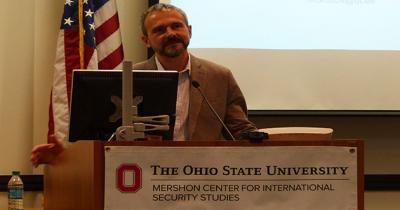 On Sept. 15, Professor Viacheslav Morozov visited The Ohio State University and gave a lecture titled “Russia’s Subaltern Empire: Toward a Radical Materialist Perspective on Peripheral Identity Politics” at the Mershon Center for International Security Studies based on his recent book. Morozov provided insight into the complexity Russia faces in its relationship with the West and satellite countries in the near abroad. Morozov argued that Russia, despite its aspiration to exert political influence in its near abroad, is still dependent on the West for economic and normative dependency. Morozov is professor of E.U.-Russia studies at the University of Tartu and chairman of the Council of the UT Centre for E.U.–Russia Studies. He is a member of the Program on New Approaches to Research and Security in Eurasia (PONARS Eurasia). 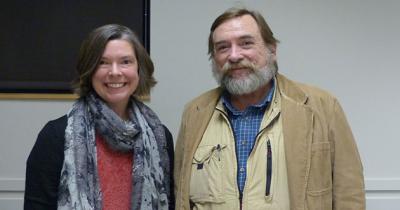 On Oct. 9, Dr. Helena Goscilo summarized her research on popular film magazines in Poland conducted in May 2015 at Lodz Film School Library and the Library of Lodz University. Goscilo’s work analyzed the impact of two film magazines, FILM and KINO, on Polish celebrities and the advertising strategies utilized by film magazines. She argued that a requirement for celebrity status is to maintain a constant presence in the spotlight; one medium that lent such exposure was popular film magazines. She also analyzed the relationship of Polish film magazines to Western publications. Her presentation was enhanced by numerous pictures from these magazines that she obtained while in Poland. Goscilo is a professor in the Department of Slavic and East European Languages and Cultures at Ohio State. She was awarded a 2015 Polish Studies Initiative Grant to support her research in Poland.

of Nirenska’s impact on modern American dance and how her cultural roots and Polish heritage greatly influenced her style. Dance gave Nirenska an opportunity to escape from the Nazi state and its influence. Nirenska challenged modernism and embraced heritage and identity expression through dance. Mozingo detailed the evolution of Nirenska’s work from Poland to America. Mozingo is a professor in the Department of History at The Ohio State University. She was awarded a 2015 Polish Studies Initiative Grant to support her research. 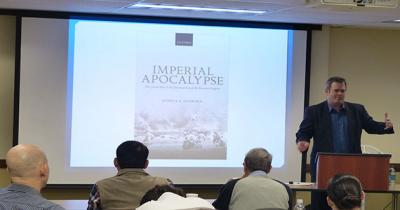 On Nov. 23, Professor Sabrina Ramet visited Ohio State to discuss the Catholic Church in Poland since 1989.

Since the collapse of the communist government, while the number of Polish people identifying themselves as Catholic and observant has remained high, there has been a marked decline amongst Polish Catholics in practicing specific rituals and holding certain beliefs; fewer Poles attend Sunday mass and question the Church’s policies on issues such as IVF, abortion and adoption. However, at the same time, several prominent Church figures and media personalities have actively promoted more conservative beliefs and successfully advocated for policies and laws to protect them. To exacerbate this disconnect between society’s evolving beliefs and the stance of the Church, there has been a continuing debate within Polish society about the extent to which the clergy collaborated with state security services under Communist rule and divulged information about Church patrons. How the relationship between the church, government and public will continue to evolve remains to be seen, but the past 25 years have already seen a remarkable degree of change.

The Center for Slavic and East European Studies and the Department of History co-sponsored a seminar on Dec. 2 featuring Dr. Joshua Sanborn from Lafayette College as part of the Russian, East European and Eurasian History Seminar series. Imperial Apocalypse, Sanborn’s most recent book, was the subject of the seminar that was open to faculty and graduate students. His book lays out the collapse of the Russian Empire during World War I as a result of state failure, social collapse and decolonization, while giving insight into the lives of ordinary individuals. Each semester, the Russian, East European and Eurasian History Seminar series invites prominent scholars from across the country, giving Ohio State faculty and graduate students the opportunity to read a selected work from an author and engage in discussion.