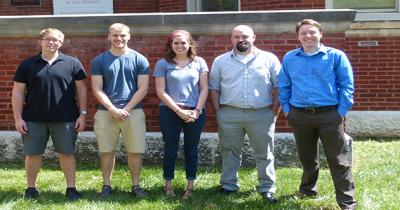 Justin Ciucevich majored in history and minored in German at the University of Alabama at Birmingham. His research interests are nation-building and Cold War politics as they relate to postwar ethnic cleansing of Germans from Eastern Europe, particularly Romania. Justin is currently studying Romanian.

Eric Connelly graduated from Ohio State in 2014, majoring in globalization studies and Russian. Following graduation, Eric received a Fulbright English Teaching Assistant grant and worked for a year at Tyumen State University in Russia. Eric is most interested in improving his Russian skills, studying new languages and exploring the tension between globalization and area studies in the academic environment.

Jon Harris graduated from Ohio State in 2014, majoring in international studies and Russian. He is currently studying intermediate Bosnian-Croatian-Serbian. He is interested in frozen conflict and ethnic unrest in the Caucasus and the Balkans.

Simon Hessler is originally from Payne, Ohio and graduated from Ohio University in 2014 with a BA in Russian and a BA in International Area Studies focusing on Europe. He studied in St. Petersburg, Russia, with the Council on International Educational Exchange during the fall of 2013 and in Moscow, Russia, in spring 2014 as part of an Ohio University sponsored program.

Katie McAfee studied economics, history and Russian as an undergraduate at Baylor University in Waco, Texas. With interests in Soviet history of health care and biomedical science, she wants  to proceed on to doctoral work in history. While at Ohio State, Katie is continuing her study of Russian and has begun studying Uzbek.