The Slovene Research Initiative was established in fall 2013 to support faculty exchanges between Ohio State and the Research Centre of the Slovene Academy of Sciences and Arts. In the fall of 2015, the second iteration of the faculty exchange took place. M.A. Johnson, the associate curator of the Hilandar Research Library and the Slavic and East European Studies Librarian, stayed in Ljubljana, Slovenia for the month of September, while Dr. Jerneja Kavcic from the Department of Classics at the University of Ljubljana came to Columbus during the month of October. Below are their impressions from their time in Ljubljana and Columbus and how the exchange aided their research. 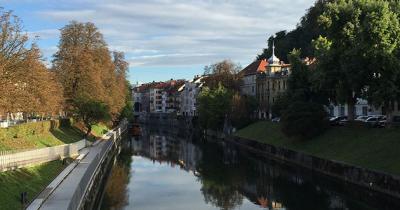 I was very pleased and honored to be selected as Ohio State's 2015 Visiting Faculty in the CSEES Slovene Research Initiative, an exchange program made possible

by an endowment from the Research Centre of the Slovene Academy of Sciences and Arts (ZRC/SAZU). I arrived in Ljubljana on Sept. 1 and was greeted by Luka Vidmar, the 2014 exchange faculty visitor to Ohio State, who is an associate of ZRC/SAZU and the Institute for Slovenian Literature and Literary Studies.

After catching up over coffee at the airport's outdoor café, Luka gave me a brief tour of the city by car, and drove me to the post-graduate and visiting faculty residence. As part of the exchange agreement, each host provides housing and access to research facilities. ZRC owns a large, fifth-floor corner apartment (living room, kitchen, bedroom, and bathroom) with a wrap-around balcony, which I instantly dubbed "the Penthouse." The panoramic view is impressive-mostly tall buildings, but with enough Alpine mountains (the Julian Alps!) in the background to remind you that it is Slovenia. The twin peaks of Šmarna gora are a distinctive element on Ljubljana's horizon, and the fortress and the Holy Mother of God Pilgrimage Church are visible from the balcony, and its church bells clearly audible.

We dropped my luggage and then went to a nearby supermarket. Luka left me with a transit card, a map and list of the five bus stops between "Mercator" and "Drama," where I would meet him the day after next. However, I recovered enough from jet lag to explore on my own the next day.

Ljubljana is a charming capital and easily navigable. The first landmark I encountered was the obelisk on Trg fransoske revolucije ('French Revolution Square'). As a native New Orleanian, I could spot Napoleon's likeness from a block away and felt immediately at home. Ljubljana came to prominence when Napoleon designated the city as the capital of his "Illyrian provinces" (1809-1816). The older part of town is particularly rich in cultural and historical monuments: the architecture, statues and the names of the city's streets and numerous squares each hint at the great narrative of Slovenia's history, although it took Luka's comprehensive guided tour (on three different days scattered throughout my month's stay) to connect all the dots from the Roman settlement of Emona (14 AD) to Ljubljana today, with particular emphasis on the 17th-19th centuries. 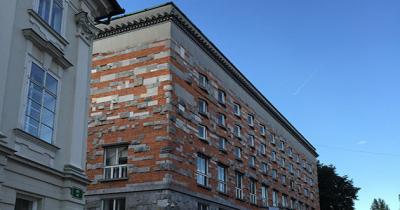 My first impression of the Department of Manuscripts and Rare Books of the National and University Library (NUK) in Ljubljana was just as welcoming. Luka

introduced me to Marijan Rupert, the department head, who offered to retrieve a few of the Slavic codices from the Jernej Kopitar Collection, so that I could begin work immediately. I spent four glorious weeks poring over original Slavic manuscripts from the 13th to the 19th centuries, but still did not have time to look at everything I wanted to. The Rare Books department, in addition to its codices, rare books and incunables, also has a fantastic collection of archival material that includes the private papers and literary manuscripts of Slovenia's scholars, scientists, men of letters et al.‒a gold mine for any humanist. For me it was a rare opportunity to explore the provenance of these codices and to read first-hand accounts of how these manuscripts were acquired and used and studied and what they meant to the linguist and philologist Jernej Kopitar (1780-1844), his patron Baron Žiga Zois (a leader of the Slovene National Revival), and to those Kopitar mentored, such as Vuk Stefanović Karadžić and Franc Miklošič.

During my first year of graduate school at Ohio State, the annual Slavic convention was held in New Orleans, and I urged my father, who was working on his own doctorate in Russian history, to contact my professors. He spoke with Dr. Charles Gribble and spent three hours in a café swapping stories with Dr. Kenneth E. Naylor. Dad also found time to attend the organizational meeting of the Society for Slovene Studies, where he signed me up as a member! The society helped facilitate the establishment of Ohio State's Slovene Initiative, which allowed me this invaluable experience.

I contributed to the Slovene Research Initiative Endowed (Fund Number: 606671) and Current Use (Fund Number: 314729) Funds in appreciation and in memory of my father, Allen McTavish Johnson, who set me on the right path so many years ago.

Can you provide some background information about yourself? What are your research interests?

What are you currently studying?

I am currently studying aspect and tense in Ancient Greek non-finite constructions and the future tense in Balkan languages (as well as in Slovenian). I have also been studying the relation between the vocabulary of Ancient and Modern Greek. In this framework, I try to answer how many words taught in Ancient Greek classes also occur in the vocabulary of standard Modern Greek. I’m trying to determine how this data can best be used in the teaching of the Greek language.

How was your visit to Ohio? What did you do on campus and with whom did you work?

During my visit at Ohio State, I spent a part of my time studying in the Thompson Library. I had access to all its materials and I was offered help from the librarians, M.A. Johnson and Miroljub Ruzic. Moreover, I frequently discussed my work with Brian D. Joseph (professor of linguistics at Ohio State), Christopher Brown (lecturer in the Department of Classics) and with the Belgian linguist Mark Janse (who happened to be visiting Ohio State ).

I gave two lectures at Ohio State. The first one was at the Department of Linguistics on Oct. 13. Its title was “Bilingualism and the Spread of an Infinitive Construction.” The second lecture was for the Department of Classics on Oct. 28. The lecture’s title was “The Vocabulary of Ancient and Standard Modern Greek.” During my stay in the U.S., I also had a presentation in the 24th Modern Greek Studies Association Symposium at Georgia State University in Atlanta, Georgia. The title of my talk was “The Presentation of Modern Greek in Ancient Greek Textbooks.”

I benefited a lot from my stay at Ohio State and I am more than grateful for having had this opportunity.