Taylor Reynolds is graduate student at the Center for Slavic and East European Studies. She received a Foreign Language and Area Studies Fellowship for summer 2015. 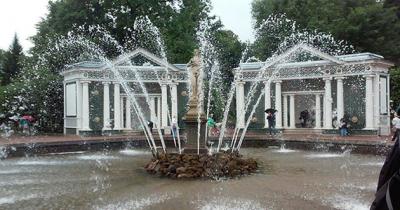 I spent seven weeks of the program with a host family in St. Petersburg and during the final week, we went on many excursions through Pskov and Petrozavodsk.

During the weeks in St. Petersburg, I attended classes at Gerzen Pedagogical University. Our classes were very small, with no more than three students each. Learning Russian in St. Petersburg could hardly be compared to my experience thus far in the United States. Though many of the instructors knew English, they refused to use it, and it really helped me improve my Russian very quickly!

One of my favorite aspects of the program was the sense of independence we were afforded. Each weekend, when we were not in classes, I was able to connect to a large group of American expatriates, Russian locals and international people. The common language was English or Russian and I had an opportunity to practice Russian much more than if I only studied in the classroom. Meeting locals especially allowed me to see the city in ways that I may have missed otherwise. Despite our independence, American Council did an incredible job of making sure we were safe and organizing excursions for the group.

Besides the final week, each Wednesday our group went on a planned excursion. Some of my favorite events were the Dostoevsky tour, seeing the incredible Peterhof fountains and going to Kizhi Island near Karelia in our final week. The Dostoevsky tour took us through the locations in the book Crime and Punishment, ending at the apartment deemed to be Raskolnikov’s in the book. The Peterhof fountains were incredible and intricate and we spent an entire day just with the fountains instead of visiting the palace itself. Finally, Kizhi Island was a place I never heard of before my trip to Russia. It was an island of old settlers and wooden houses and churches, preserved over time. It was interesting to consider the past of Russia.

Overall, I am so glad I had the opportunity to study abroad in Russia this summer. I am sure that my Russian improved by leaps and bounds, but even more importantly, I was able to have hands on experience with a part of the world that I have studied and I have returned with a wider perspective on the world.